Lisa Neher is a superb, versatile musician able to transition from operetta to contemporary with poise and professionalism. She impressed audiences and critics alike with her electric energy and innate gifts as an actor. It’s no surprise she is quickly becoming a champion for composers in our region and nationally. --Justin Ralls, Co-Artistic Director, Opera Theatre Oregon 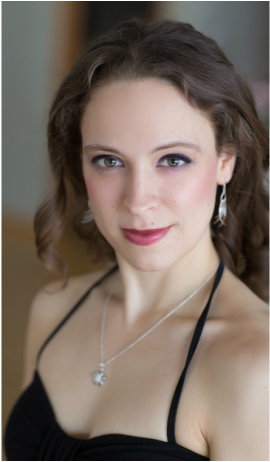 Photo credit: Alisabeth Von Presley
Portland, Oregon mezzo-soprano and composer Lisa Neher (pronouns: she/her, last name pronounced "NEER") (DMA) thrives in the crossroads of the concert hall and the theatre stage. Trained as a stage actress, she is equally at home in the worlds of opera and spoken theatre, bringing dramatic specificity and committed physicality to her performances. Lisa’s compositions are shaped by her keen sense of dramatic timing and feature aching, lyrical phrases, energetic rhythmic motives, and intensely dissonant pitch clusters.

Lisa’s musical-theatrical fluency and passion for contemporary music have led to engagements such as the first staged version of Sun Songs: Three Micro-Operas by Augusta Read Thomas with the Center for New Music, the world premiere of Aaron Israel Levin’s Fiumana, for mezzo-soprano singing while playing the bass drum, and the leading role of Jennifer in the world premiere of Rita Ueda’s chamber opera One Thousand White Paper Cranes for Japan with the Singaporean ensemble Chamber Sounds. Lisa is an active advocate for new music, frequently premiering new works as well as established masterworks of the last fifty years. She has performed with the Iowa Composer’s Forum on multiple occasions and will premiere song cycles by winners of their student composer competition in the spring of 2018.  Lisa is the creator of the One Voice Project, a one-woman performance combining contemporary poetry and new musical works for unaccompanied voice chosen through a call for scores initiative.

​Lisa is in high demand as a concert soloist. Her credits include Duruflé’s Requiem, Mozart’s Requiem, Vesperae Solennes de Confessore, and Coronation Mass, Bach’s Magnificat and Ascension Oratorio, and Arvo Part’s Pässio, with groups such as the Central Iowa Symphony, the Grinnell Oratorio Singers, and the Chamber Singers of Iowa City. Her operatic credits include Dorabella in Così fan tutte with Iowa City Concert Opera, Dolores in The Gondoliers, Mrs. Malaprop in The Rivals, Orlofsky in Die Fledermaus and Annio in La clemenza di Tito with Martha-Ellen Tye Opera Theatre, the Student in the premiere of the chamber opera The Nightingale and the Rose by Li Kai Han Jeremiah with Helianthus Ensemble, and Cherubino in Le nozze di Figaro with the Midwest Institute of Opera. Lisa was a Young Artist with Cedar Rapids Opera Theatre and the Vancouver International Song Institute. 2017 saw Lisa touring Iowa with Duo Andura, performing music of North and South America and performing rarely heard works by Baroque composer Giovanni Paolo Cima in a new edition prepared by Dr. Christine Getz at the University of Iowa.

Lisa’s compositions include solo and chamber music for instruments and vocal works in the operatic, song, and choral genres. Her particular passion for text and poetry has led to works such as her chamber opera White Horizon, about a nineteenth-century Arctic expedition gone wrong, and her song cycle Snapshots, which she performed at the Cortona Sessions for New Music in Italy. Lisa was selected to be part of the inaugural year of the Gabriela Lena Frank Creative Academy of Music, which mentors emerging composers. Recent premieres include Twister for Durward Ensemble of Cedar Rapids, Icy Celestial Bodies for solo marimba performed by Matthew Andreini on the Iowa Composer’s Forum fall concert series, and Thaw, a marimba duo for Mayumi Hama and Chris Froh, which was performed at the Sacramento State Festival of New American Music. Lisa is a member of the Iowa Composer’s Forum and ASCAP.

Lisa has served on faculty at Coe College and Kirkwood Community College in Cedar Rapids Iowa and Grinnell College in Grinnell, Iowa, teaching applied voice and applied composition, and maintains a vigorous private studio. Lisa graduated summa cum laude from Lewis & Clark College with degrees in vocal performance, music composition, and theatre, and holds a master's degree in music composition from the University of Kansas and a Doctor of Musical Arts in voice performance and pedagogy from the University of Iowa. Her doctoral essay explores the chamber vocal works of composer Gabriela Lena Frank. She is a vocal student of Stephen Swanson, Katherine Eberle, Julia Broxholm, and Susan McBerry, and studied composition under the tutelage of Michael Johansen and Forrest Pierce.